In a conversation with Axel Vervoordt—actually who he is (a curator, designer, and antiquaire named to Architectural Digest‘s inaugural 2018 AD100 Hall of Fame) doesn’t really matter, because Kanye West interviewed him, and it was revealed that Kanye West is writing a philosophy book! Plato is shaking!

According to West, the book will be titled Break the Simulation, and it will delve into West’s “concept” regarding photographs:

A rather interesting sentiment for the man who married Kim Kardashian, but it’s Kanye West, so I’m into it!

On a more serious note, it’ll be interesting to see whether this book actually comes to fruition, and what exactly it will contain. Kanye West is a transcendent and brilliant musician, but watching him—him, the public figure—has always been an exercise in deciding what is genius and what is tragedy. An incredibly popular musician writing a philosophical book on the power of photographs whilst married to a woman who revolutionized—perhaps permanently—the relationship between our identities and social media with her own careful curation of self-image…well.

Anyway, here are some of my favorite Kanye West tweets! 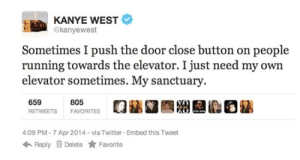